My reasons for starting keto and intermittent fasting... 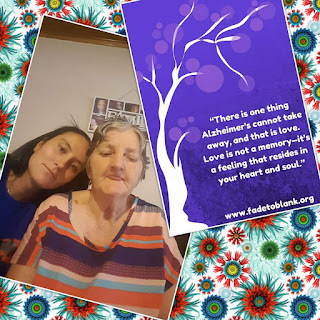 My decision to try keto and intermittent fasting may seem extreme to some, but I have very personal reasons for trying and I will share these reasons with you guys.

My greatest hope and reason for doing the keto diet is to use it as a means of preventing alzheimers disease and maybe later use it as a treatment plan for Jacques ' autism. There are also some people who use keto to treat type 1 diabetes but I will research the pros and cons thoroughly before I decide to implement keto with Jacques.

My family was not lucky in the gene lottery. My mom had early onset alzheimers disease and my uncle has also been diagnosed with dementia.

*"A rare form of Alzheimer’s that affects younger patients is known as early-onset. It occurs in no more than 5 percent of cases and tends to develop before the age of 60. Studies show that in most cases it does run in families. This inherited form of early-onset is known as Familial Alzheimer’s disease (FAD).
FAD is caused by any one of a number of different gene mutations on certain chromosomes (i.e., 1, 14, and 21). If a parent carries even a single genetic mutation for FAD, their children have a 50/50 chance of inheriting that mutation. If the mutation is inherited, the child is almost certain to develop FAD." My sisters and I thus have a significant increased risk of developing early onset alzheimer's disease.

I was one of my moms primary caregivers and the toll alzheimers took on her as well as our family was devastating. I will do anything to try to decrease my chances of developing this aweful disease. I read in one of the alzheimer's fb groups I am part of something really sad but I could understand where the lady was coming from. She said that if she was to develop alzheimer's disease that she wanted her children to lead her to the edge of a cliff, then they should put on blind folds and shove her over the cliff. She did not want her children to go through the same things she was experiencing with her loved one now.

I have started the keto diet as well as intermittent fasting with the hope that it will at least decrease my chances of developing Alzheimer's disease.

I will update my progress and experience on the blog and hopefully this will give hope not to my sisters and myself only, but to all going through similar circumstances.

Popular posts from this blog

Where will our kids go??

October 11, 2019
A friend of mine, with a child with disabilities once told me that her biggest wish is that her child will die before she does. This took me by surprise to say the least, but then she explained to me the following. She does not have a support network. She is solely responsible for her childs well being. If she should pass away before him she has no-one to take care of him. Isn't this terrible! I know of a lot of special needs families in the same circumstance. If something should happen to mom or dad, what will happen to their disabled child?
In many instances the disability is so severe that the extended family members just doesn't feel equipped to take care of the disabled individual.
Unfortunately, as our disabled kids grow older, they become less "acceptable" for the general population. Things they could get away with in their earlier years are not acceptable as they grow up. But what people don't realize is that in most cases the disabled person did not &qu…
Post a Comment
Read more

October 07, 2019
This post is very difficult for me to write. But it is part of my healing so here goes.

I was feeling so tired and so alone. I could not see light, I only saw darkness. I thought if this is it, if this is all there is I can just as well be dead. But if I'm dead what then? Where will I go? Will there be nothing? That can't be, there has to be something after death, but then there also has to be a God. And if there is a God then it is not as hopeless as I thought. And I could grasp and cling to that thought. I could see myself going on. That was the lowest point ever in my 37 years on earth.
What brought me to this point is a very long story. It started a little more than 14 years ago with the birth of my first born son.
I have always been a control freak, I like to plan and to feel in control of a situation.
For the past 14 years I have tried to be in control and on top of all my sons medical issues. I researched every new diagnosis so carefully that my husband started to refer…
7 comments
Read more

7 Things I have learned parenting my son with special needs

October 08, 2019
I will try to limit this list to the top 7 things I have learned on our journey thus far. There is a lot more but I will leave that for a follow up post.
1 - You appreciate the little things.
In our world even the little things are big things. When Jacques goes to visit grandma (who lives on the same plot as us), I get the chance to make a cup of coffee and drink it hot. This may sound like such a small thing, but after the third luke warm cup of coffee because you had to change his nappy, or pick up the pieces of popcorn he threw around earlier, that hot cuppa is a life saver😉.
2 - You have to have a sense of humor. When your 14 year old son leans over from the backseat to press the hooter on the steering wheel (for the fifth time in as many minutes) you learn to go with it and find it as funny as he does.
3 - You grow a thick skin.
Most people we meet on this journey are very understanding but you get the less than understanding folks. Jacques loves clapping hands when we go out t…
Post a Comment
Read more

Elsa Pieterse
I am happily married and the proud mommy of two beautiful boys, I live in Pretoria, South Africa. My oldest son has many health challenges, at this stage we do not have a conclusive diagnosis, we suspect FG Syndrome or mitochondrial disease. I love both my sons equally and am very proud of both of them.